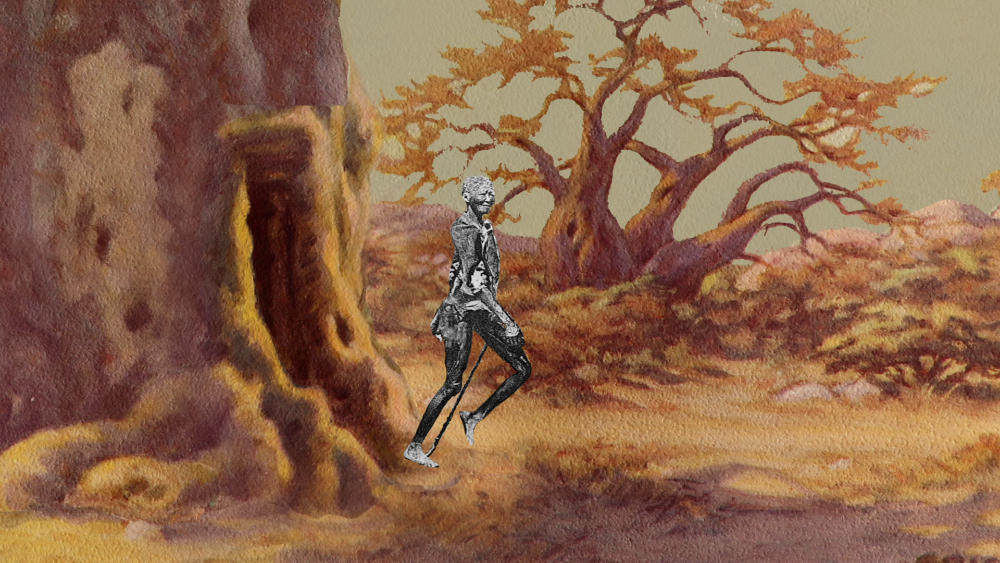 Cloud Migration addresses the movement of archival objects and artistic artefacts which have been digitised and placed in a computing environment.

The film animates a privatised history, transfers privatised digital images and makes them public and points to the contemporary representation of filters, clouds as storage, landscape as fiction prevalent within social media and image-making technologies.

Ntuli’s work figures around fictional geographies, simulation, archives, and representation. He explores these concerns through a collision between documentary and fiction using collages, performance, and video installation. Through these concerns, he questions the format of lens-based media in telling historical events and situations within geopolitical imaginaries.

Where are you from and how did you become interested in moving image work?

My work has two converging aspects. There is the research component, part of which deals with video making and performance practice. I came into video performance by documenting my performances. And I thought of using video documentation as a kind of work. The material became work in progress because the reception of performances is normally ephemeral. So I started that as research into performance and video. Then there is the collage work which is mostly studio-based. The difference between them is working with the public space (collaborative) and working in the studio. I kind of work between those spheres so I could imagine my work even outside of the studio. Then within the city, I am interested in archiving the city and creating visual narratives within this lens.

I am also fascinated by photographic images. For example, I did one project in 2009 which figured around the evictions that happened in the city of Johannesburg during the xenophobic attacks and ongoing gentrification. It was a response to reimagining the evictions and bodies not really belonging in a particular space. But it was an abstract rendition of it all. Fortunately, the conception of the work is called Mjondolo. Mjondolo is a shack. I was thinking about the ideas of architecture and the body. I made costumes that people can embody, and wear. I asked performers to take part in the performance, to perform these architectures.

What inspired/influenced you to make the work?

I am showing two stop motion films, titled Cloud Migration . The film began with an engagement of the Voortrekker Monument archive consisting of landscape prints, my intervention included juxtaposing the prints with the Alfred Duggan Cronin series of ethnographic images, these images document southern African tribes. The works point to the contemporary representation of filters, clouds as storage, landscape as fiction prevalent within social media and image-making technologies.

What are you working on at the moment?

At the moment I am working on an Augmented Reality (AR) App. The purpose of this app is to archive my work within the digital space such as the NFT. It serves as a possibility of extending my work in relation to juxtaposing it with two dimensional artworks. I am interested in interactive film making practices, where moving images are performed by audiences, which disrupts the everyday usage of engaging with visual apparatuses.

Phumulani Ntuli (South Africa, 1986) obtained a Bachelor of Fine Arts degree in 2012 from the University of Johannesburg, where he majored in sculpture. He holds a Master of Fine Arts - Arts Public Sphere from (ECAV) Ecole Cantonale D’Art du Valais in Sierre-Switzerland and was awarded Prix-excellence for his ongoing research project Permutations of an event centered around notions of archives and surveillance.

In 2016 Ntuli participated in residencies/workshops at the Fondazione Pistoletto in Biella, Italy and the Alps Art Academy in Chur, Switzerland. He presented two solo performance projects at Alps Art Academy in Chur, Switzerland in 2016 to 2017, Umjondolo at Goethe-Institut, Johannesburg; Thupelo, Cape Town; and Infecting the City, Johannesburg in 2012 to 2014.