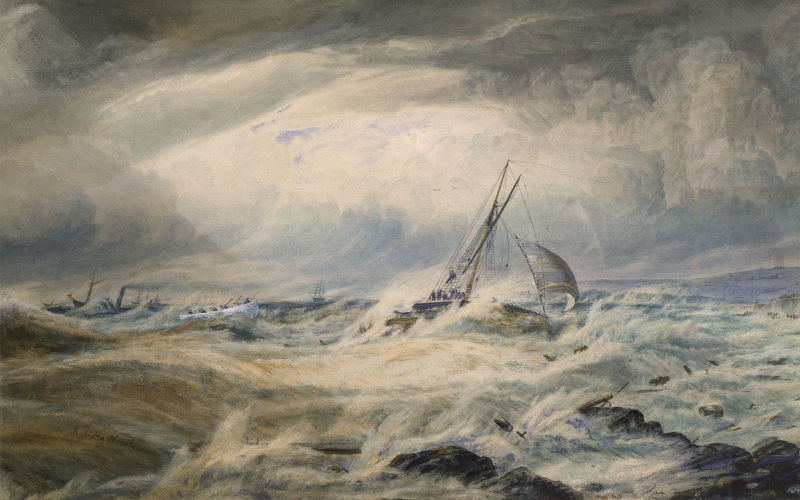 We’re all at sea with this WORK OF THE WEEK!

As its descriptive title attests, this dramatic watercolour by Irish artist Henry Albert Hartland depicts the wreck of the S.S. Ibis at Ballycroneen Bay off the East Cork coast on the winter – rather than summer – solstice, 21 December 1865.

Owned by the City of Cork Steam Shipping Company, the screw-steamer S.S. Ibis was described in The Annual Register as ‘one of the finest vessels belonging to Cork.’ Indeed, built of iron and was one of the largest ever constructed in the southern port.

Did you know: S.S. Ibis foundered off Poer Head in Ballycroneen Bay, just east of Roche’s Point, following technical failure of its crankpin which in turn led to its engine stopping?

Despite the efforts of its crew under Captain Holland, and its sister vessels Sabrina and Cormorant being sent to assist, S.S. Ibis drifted onto the Julien Rock – now also known as the Ibis – causing its funnel to crash down and for the ship to break in two. Upon arrival of the tugboat Lord Clyde out of Cork Harbour, the two halves of the ship were said to be half a mile apart. This is the stormy spectacle that Hartland captures.

Henry Albert Hartland (1840-1893) was a painter of landscapes who predominantly worked in watercolours. Originally from Mallow, County Cork, he was educated at the Cork School of Art (now Crawford Art Gallery) and subsequently worked as a book illustrator and theatre set decorator. Others in his family were gardeners and operated plant nurseries around Cork.

This painting is featured in THE PORT OF CORK COLLECTION (Floor 2) until 28 August.