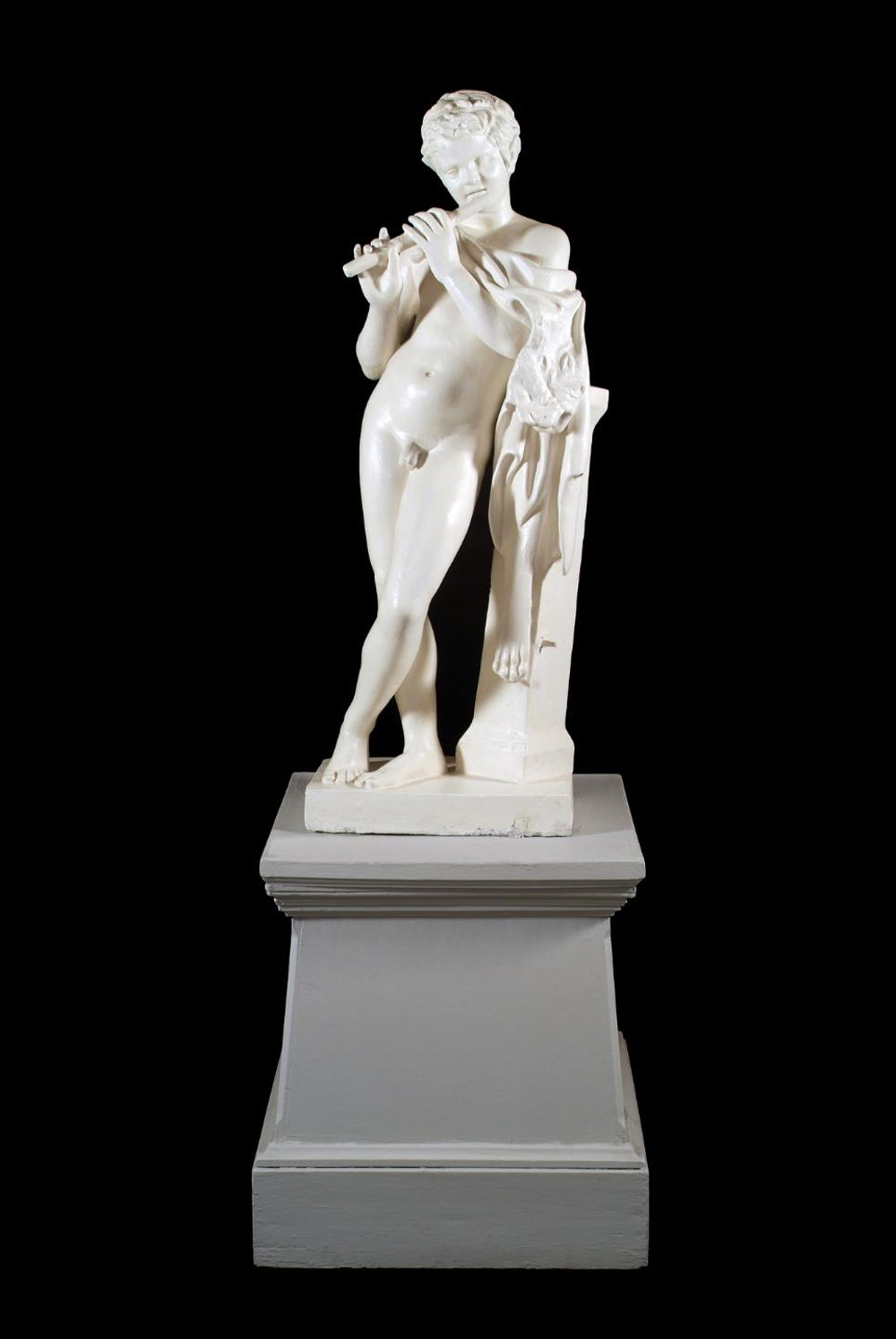 The Piping Faun, c.1816 plaster cast of marble original in the Louvre, Paris

Talking Pictures is an online resource for children and their adults based on artwork from the Crawford Art Gallery Collection. We will share creative prompts for happy talk and play every Wednesday.

About the artwork
This sculpture is a cast (or copy) of a marble sculpture that is in the Louvre, a large museum in Paris, France. The faun is seen looking relaxed with a cloak around his shoulders, playing a pipe or flute. You can see this sculpture in the Sculpture Gallery in the Crawford Art Gallery – that’s the room with the blue walls and all the white statues.  There are a few faun sculptures in the Crawford collection – but what is a faun?

What is a faun?
A faun is a half-man, half-goat creature that features in old Greek and Roman mythology stories. Fauns are often depicted as silly but peaceful creatures and are sometimes shown playing a pipe in the forest. This faun sculpture does not have goat legs but we can tell he is a faun from his big pointy ears!

If you could be half-human, half-animal…which animal would you choose?

What would you be called?

Would you live on the land or in the water or in the sky?

How would you move around? Would you fly or slither or swim?

What noises would you make?

What would you eat for breakfast?

What would you do for fun?

Would you go to school or would you have a job?

What creatures would you have as friends?

What games would you play with those friends?

Seán the Faun goes on an adventure! Use the rhyming words below to make up a poem or story about Seán the Faun…

Probably the most famous faun in the world is Mr. Tumnus from The Chronicles of Narnia series of stories by C.S. Lewis. Mr. Tumnus is a faun who lives in Narnia, wears a red scarf, and carries parcels and an umbrella. A little girl called Lucy meets Mr. Tumnus when she stumbles into the snowy land of Narnia through the back of a wardrobe. Mr. Tumnus then invites her to tea….

This is only the beginning of Lucy’s adventures in Narnia with her brothers and sister. You could continue the story by reading the book series or watching the films that have been made based on the books.

Fauns love to dance and play the pipe. Maybe the statue of the piping faun dances in the gallery when nobody is watching! We can be dancing statues too…

Here is how you play musical statues at home:

One person plays music on a phone or CD player while everyone else dances around the room. When they stop the music everyone must freeze like a statue and stay very still. The person who stopped the music walks around the room and inspects that everyone is staying still. If anyone moves, they are out. Continue playing and stopping the music until there is only one person left standing and they are the winner!

Maybe you’d like to do more research on mythical creatures and find out more stories? Are there any creatures from Irish mythology that are half-human and half-animal? How could you find out about these? Maybe you could look at a book, search on Google or ask your grandparents or an older neighbour.

See what you can discover! Maybe you’d like to write about the creatures or draw them?

Can you see what cool half-human, half-animal creatures you can make working together with your family or friends?

First, fold a piece of paper into 4 sections. Start out by drawing a head at the top and fold over the paper to hide your drawing, but mark in lines to show where your drawing ends, as shown below. Pass the paper to someone else and they can draw the next section of the creature’s body, without seeing the drawing that came before. Take turns drawing sections until the body is complete and then unfold to see the crazy creature you have made!

Lastly, you could draw in a background for the creature to show where they are and what they are doing.

Were you able to unscramble them all?